A large survey of Antarctic life was conducted back in year 2008 by scientist all over the world. New Zealand’s National Institute of Water and Atmospheric Research played a key role in this survey. They and other researchers collected 30,000 sea creatures—many new to science—during a 35-day census in Antarctic waters in February and March. The large-scale survey was part of the International Polar Year and Census of Antarctic Marine Life programs, which study the diversity of Antarctic marine life. Of many new species discovered, prior unknown to man, we are presenting ten.

This 19 inch long creature may be tunicate or a sea-squirt, say scientists. This mysterious animal was found floating 7218 feet below water surface in the Ross Sea off southern Antarctica. 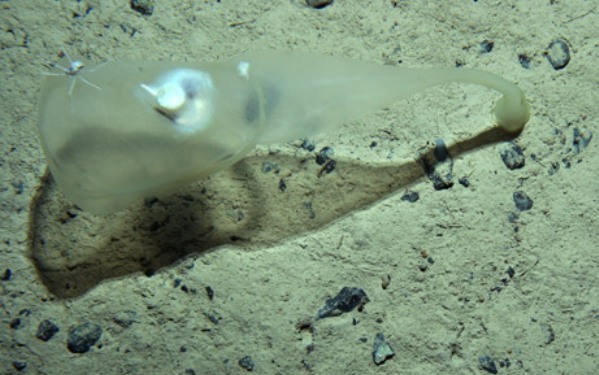 This is, what scientist say, a 9.8 inch long sea spider found in Ross Sea shelf in southern Antarctica. Cold temperatures, few predators, and high levels of oxygen in seawater could explain their gargantuan size, Don Robertson of New Zealand’s National Institute of Water and Atmospheric Research told the Associated Press. 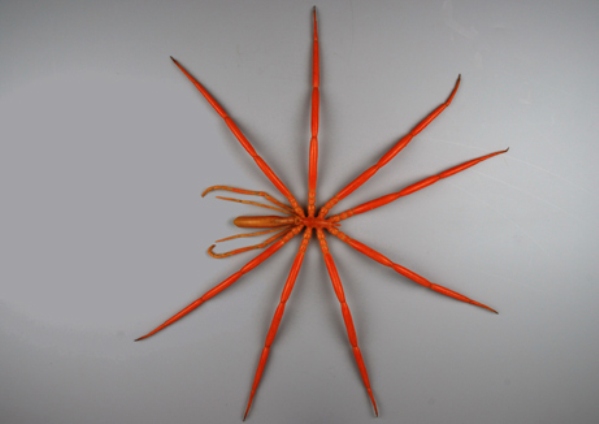 They call it the Antarctic Octopus and it was marked as the 18th octopus species ever found. This octopus was found at the depth of 3280 feet. 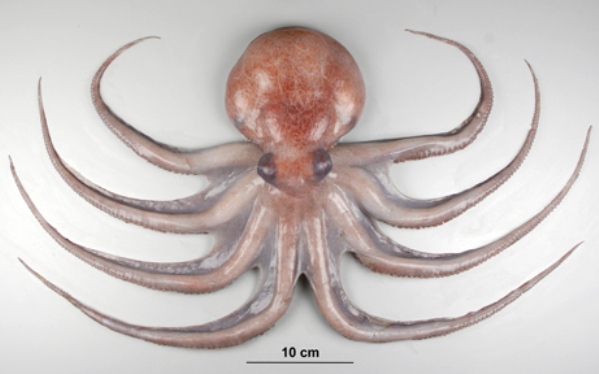 A unique type of starfish, that looks like a sack, measuring 24 inch in length was discovered by New Zealand’s National Institute of Water and Atmospheric Research on February 15, 2008. 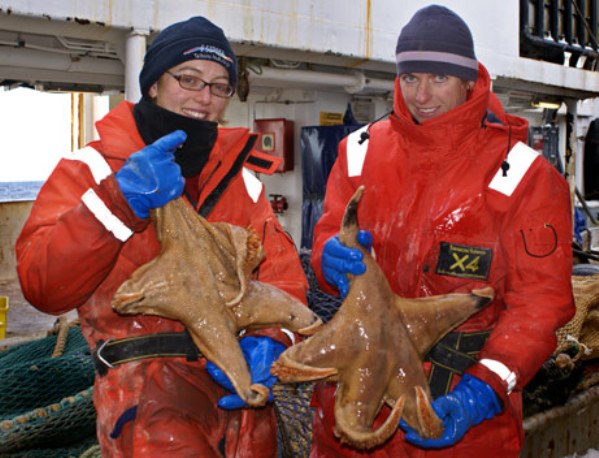 This is a totally new species. It measures 2.5 inch across the heard and up to 39 inch in length. 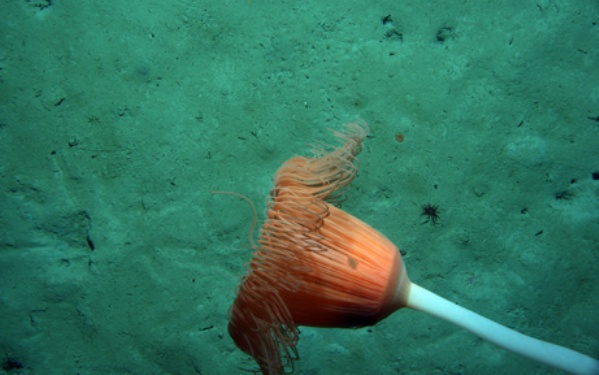 The call it stareater, also discovered in 2008. This fish has very soft skin that was damaged by the net (see pic below). The fish generates red light and lures its prey towards it. Once the prey is in striking distance, the sharp, needle-like and curved teeth give no second chance to it. The fish belongs to Stomiidae family and grows up to a size of 8.3 inch. 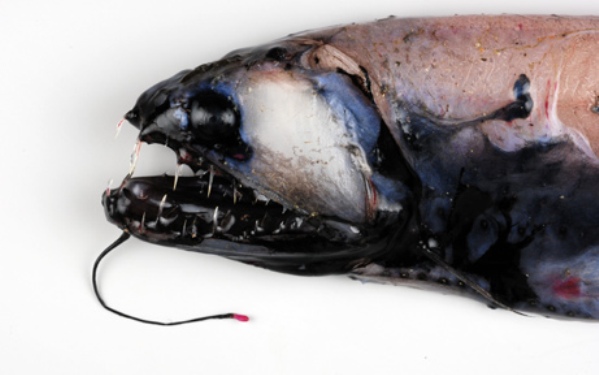 This is a new type of daggertooth, and according to scientist the southernmost daggertooth ever found. The fish has sapphire blue eyes along with a long mouth containing curved teeth to immobilize prey, clamping down and pulling back to tear through and paralyze the victim’s spine. 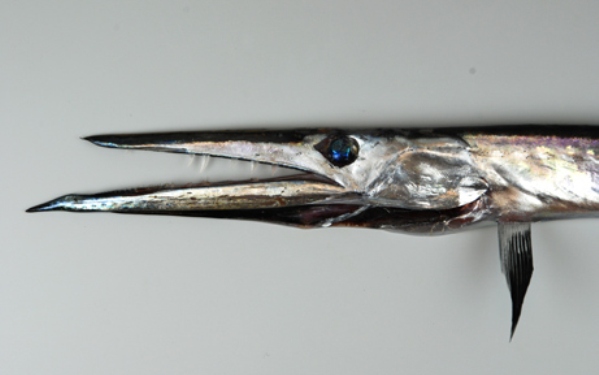 This species is called amphipod and was first discovered in year 2004 by Antarctic research ship Tangaroa. This crustacean looks like a shrimp and was collected from a depth of 985 feet from the same location in year 2008. 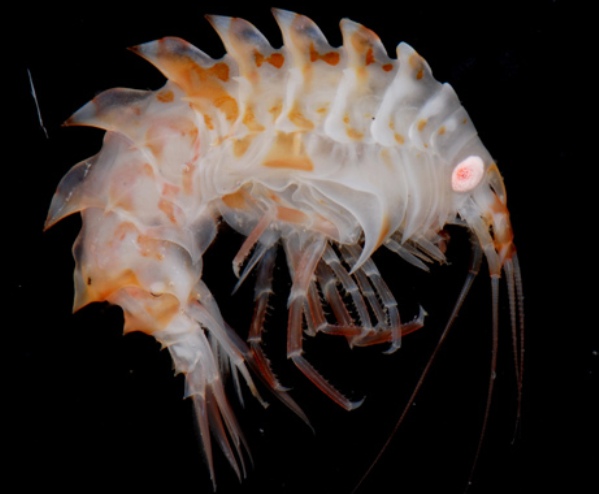 It is a new specie of sea pig; declared as a genus of sea cucumber (holothurians). Sea cucumbers are part of a group of marine animals that inhabit the seafloor, including sea squirts, sea stars (starfish), sea slugs, corals, clams, sponges, and urchins. 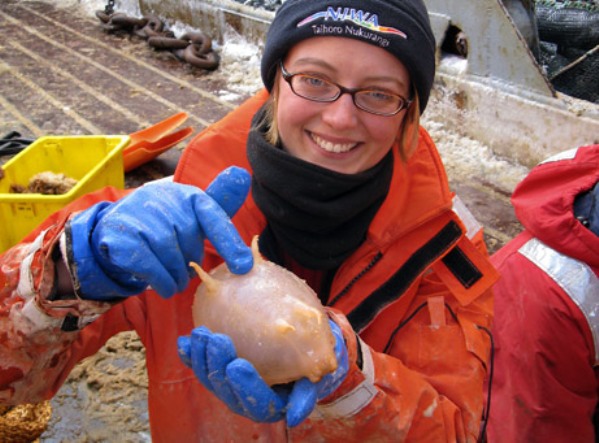 High-powered cameras photographed this sea star or a starfish of the genus Labediaster (lower left) surrounded by brittle stars on a seamount 492 feet (150 meters) below the surface of Antarctica’s Ross Sea. 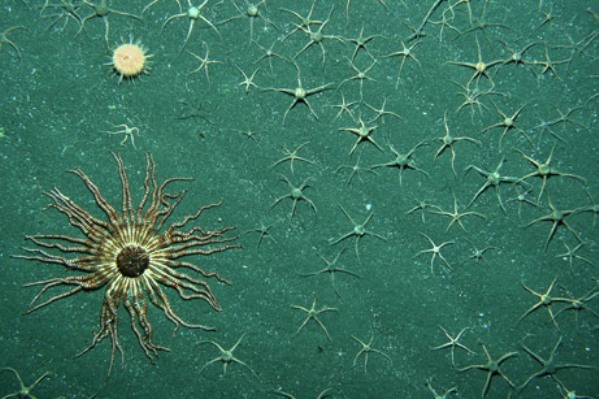